Historical Details of the farm

For centuries both before and after the Norman Invasion of Pembrokeshire, the Bishops of St David’s controlled the area between St Davids and Fishguard, known by the original name of Pebidiog. Until the Norman control after 1115 administration of this area was carried out under Welsh Law using ancient customs as confirmed by the written record of Hywel Dda (died 950 AD)

After 1115 the various Bishops exerted varying levels of control over the area. These efforts varied fro exercising control and recording to delegating control and eventual transfer of ownership to other parties who may have been family members.

In 1326 under Bishop David Morgan the record of the Bishops’s property in Pembrokeshire and beyond was made. This document shows farm names and area of arable land (caracutes) names of rent paying tenants, but with substantial gaps in the whole area, as certain areas by that date had already passed out of the Bishops control and ownership.

Pwllcawrog farm is recorded in the Black Book as a Mill and remained in the Bishops legal ownership until the 19th century.

Throughout the ownership by the Bishop a succession of agricultural tenants lived and farmed the property. From the late 17th century accurate records are available of the tenant famers and the details of the farm itself.

Prior to 1700 accurate details of the tenant farmers are vague. There are reference to Perkins on Perkyn families and various records back to the 1550’s

However, for certain John Perkins (1697-1763)) lived and farmed Pwllcawrog and this family were tenants of the property for nearly 200 years, until the sale of the farm in the 1880.

Not only did the family live at Pwllcawrog, but descendants and relations occupied a number of properties in North Pembrokeshire and the daughters married into many local families. These farms included Llanvirn, Porthlysky, the Valley at St Davids, Henderwen (near Fishguard) and by marriage Caerhys, Hendre, and Hendre Einon.

Other members of the family emigrated to Tasmania and were the foundation of Perkins descendants in Sydney, Melbourne, New Zealand, Toronto and various parts of the the UK.

In 1844 the leaseholder JH Harries of Priskilly (Mathry Parish) executed a lease to David Perkins for Pwllcawrog farm.

In 1880  under the ownership of J Henry Harries of Priskilly near Castle Morris the farm was sold. The tenant David Perkins had remarried and lived with his second wife at Penlan, St Davids. He was a farmer and auctioneer. His two sons Edward and Thomas left the area, Edward to Penysgwarne, Pencaer ad Thomas tool the tenancy of Sandy Haven farm, St Ishmaelss on the north shore or Milford Haven. Their descendants sill live and farm in the North Pembrokeshire area.

Born in 1838 Edward Perkins has left detailed written descriptions of his life at Pwllcawrog. Here are some of his details and comments:-

“There was but one threshing machine in the whole district when I was born (1838). The old flails could be heard going ‘Thud Thus’ from morning until night from October until May”

“The man who endeavoured to cut and reap corn by machine was not only considered to be foolhardy but also a sinner before God, and to waste it in any way was regarded as being a sacrelidge”

“Before the discovery of gold in California there was hardly any gold or silver in circulation. You would always be paid in kind. You could have as much as you wished of barley, wheat, cheese, butter or wool, but not money”

“At the time there was a good deal of going away to Glamorganshire. They say out from St Davids in the early morning and walked as far as Carmarthen (45 miles), on the second day he would reach Neath (35 miles) and on the third day to Hirwaun and the prospect of work. ” (Wages were 10 to 15 shillings per week, 50 to 75p per week in today’s currency)

A copy of the full text is available to read 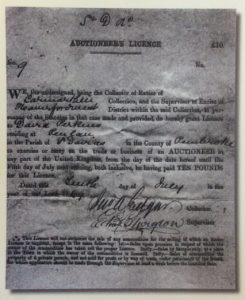 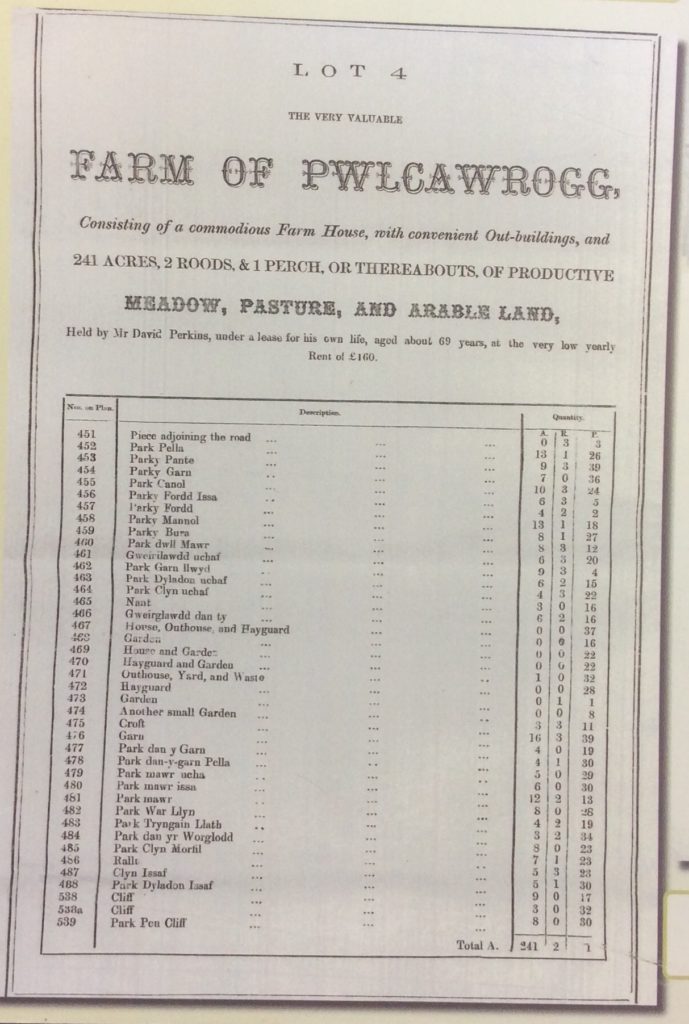 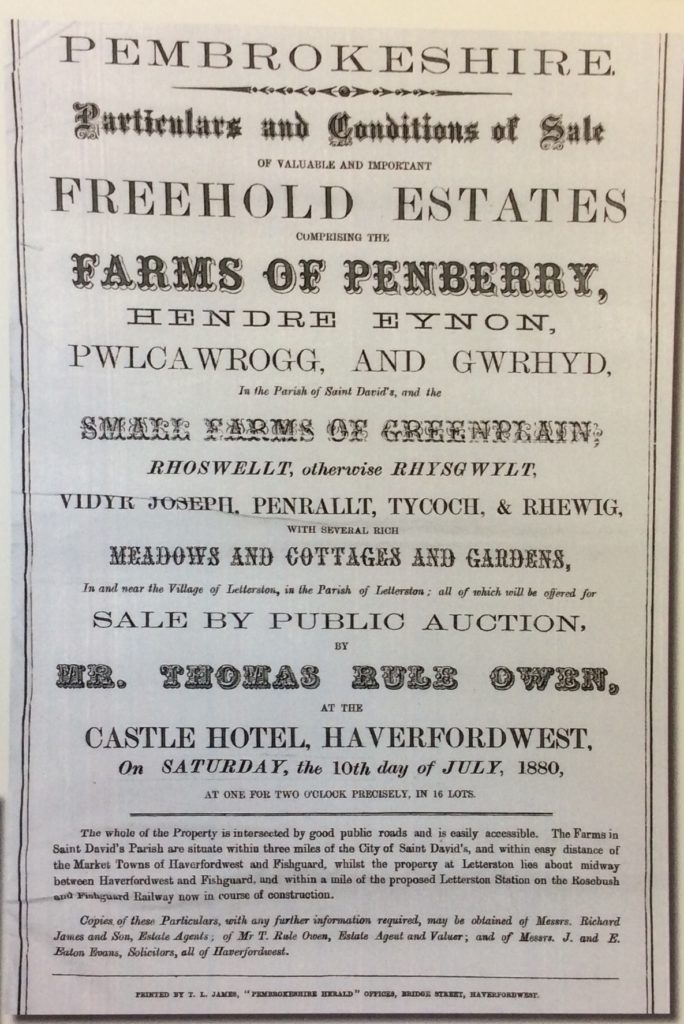 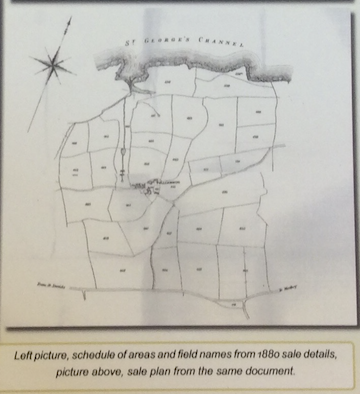 Copies of the sale particulars by J Henry Harries of Priskilly, Castle Morris selling in 1880 Pwllcawrog and various other properties in order to raise money for his purchase if Tregwynt in 1878. It is likely that these St Davids properties originally were owned by the Owen Family of Priskilly and there is record fo a lease in 1638 made by the Bishop of St Davids. In addition to Pwllcawrog Farm the sale included Penberry, Hendre Einon and Gwrhyd on the St Davids Peninsular. 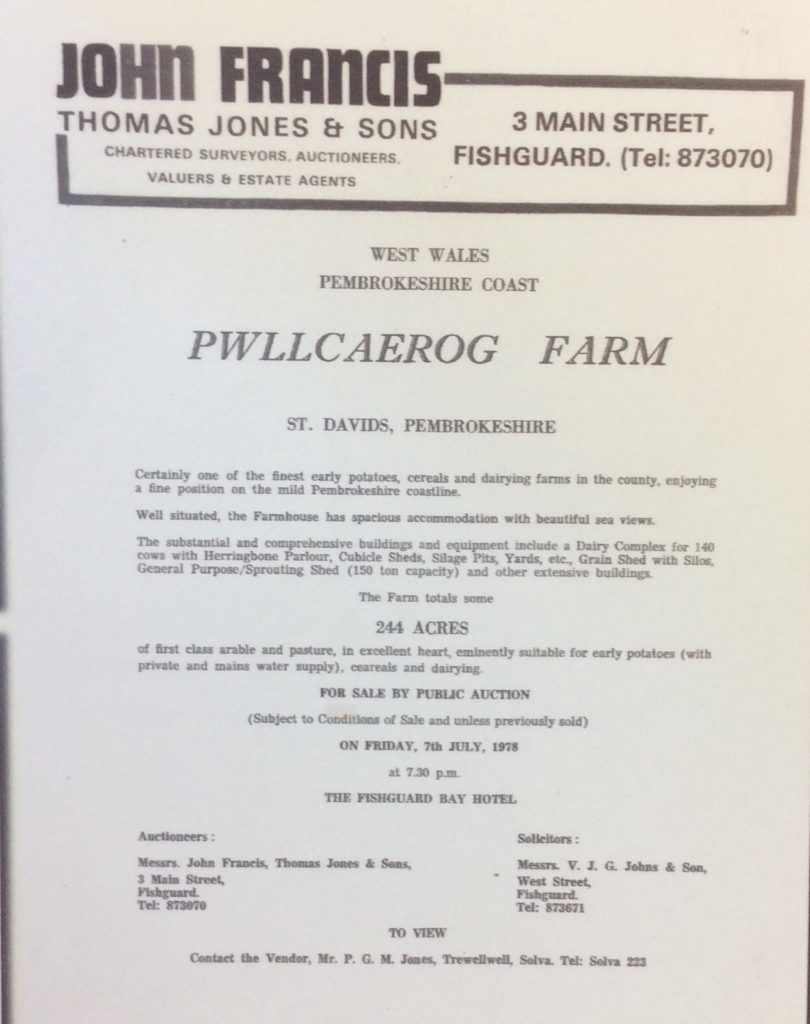 The details above advertise the auction sale of Pwll Caerog (formally Pwllcawrog) in 1978 on behalf of Paul G M Jone of Trewellwell, St Davids. Mr Jones purchased the farm in 1961 and was responsible for the development of the dairy facilities at the farm. The farm was sold to the late Idris Davies of Trefayog, St Nicholas who subsequently sold the property to the National Trust., Today Ian Griffiths is the tenant of the National Trust and has converted all of the farm building with the Trust’s approval to establish a major holiday and tourist facility.